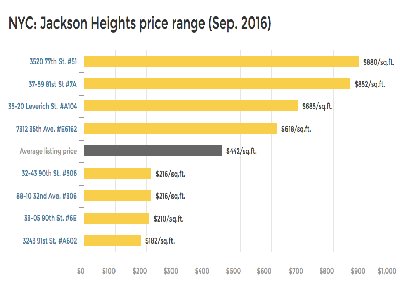 Last month’s listings across the area show the most expensive apartment, a three-bedroom, two-bath at 35-20 77th St., listed at $1.1 million — which averages out to $880 a square foot.

Compared to a new development at 46-30 Center Blvd. in Long Island City, which is $2,650 a square foot, the price is relatively low, said Constantine Valhouli from the data site NeighborhoodX.

“Jackson Heights is a more affordable alternative for people,” he said.

Apartments available for sale in September ranged from the $1.1 million three-bedroom on 77th Street to a one-bedroom on 91st Street between Northern Boulevard and 32nd Avenue listed for $139,000. The average cost is around $442 a square foot, data shows.

This excludes foreclosures, short sales, lots focused solely on development and other restricted housing. Although Jackson Heights is very distinct from neighboring Elmhurst, they both offer diverse price points to buy, Valhouli said.

Jackson Heights has remained stable throughout its history, which has prevented “Williamsburg-style” gentrification despite rising costs and other changes in the neighborhood, he said.

“Jackson Heights is going to rise gradually, both in terms of organic demand in existing property, and — where it’s permitted for zoning — or ground-up development,” he said.

And while there’s been lots of hype of Jackson Heights becoming a new “hip” haven, especially with L train disruptions in the future, its changes could go a different way than neighborhoods along the Brooklyn line.

“You’re probably going to end up seeing it develop along the lines of a Park Slope or a Cobble Hill rather than an East Village or Bushwick,” Valhouli said.