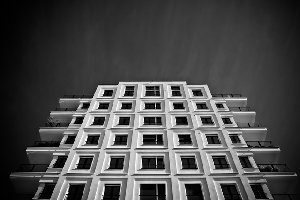 Manhattan apartment rents are on the decline — unless you’re living in a no-frills building without a doorman. For those units, rents just hit a record.

While new luxury apartments with doormen — and other extras, like pools and gyms — are proliferating and landlords are cutting deals to get them filled, renters who seek more affordable havens have been driving up demand for older, basic units, for which the supply is more fixed.

The median rent for Manhattan buildings without doormen jumped 5.8 percent in April from a year earlier to $2,995, the highest in records dating back to September 2011, according to a report Thursday by appraiser Miller Samuel Inc. In buildings that have door attendants, the median fell 3.1 percent to $3,758, the biggest annual decline in more than four years.

“You have a lot of people looking for deals out there because the rents just got pushed so high,” said Hal Gavzie.

A surge in construction of new apartment towers has given tenants more choices, and some relief from years of relentless rent increases. In 2017, more than 5,500 newly built units — most of them high-end — will be added to Manhattan’s market-rate rental inventory, data from brokerage Citi Habitats show. That jump in supply means owners of fancier buildings need to work harder to lure tenants, offering sweeteners such as months of free rent and payment of broker fees, on top of reductions in asking prices.

Publicly traded landlord Equity Residential, for example, is letting renters pay reduced deposits of $1,000 at many of its Manhattan properties, all of which count doormen as a standard, among other amenities. The company has said that New York City job growth is weak in the high-paying industries — such as finance — that produce employees with the means to rent at its properties. At Equity Residential’s newest Manhattan building, at 170 Amsterdam Ave., on the Upper West Side, one-bedrooms start at $4,230.

In doorman buildings, 35 percent of all new leases in April had some type of landlord giveaway, according to Jonathan Miller, president of Miller Samuel. In buildings without doormen, 22 percent of deals last month included concessions. Leases were equally divided between the two types of buildings.

Concessions aren’t as essential for entry-level apartments “because they’re a value in comparison to other parts of the market,” said Gary Malin, president of Citi Habitats. The brokerage released its own report on the Manhattan rental market Thursday, which said 28 percent of all new leases it brokered last month had incentives, compared with 19 percent a year earlier.

For Brian Jay and his girlfriend, who relocated to Manhattan from Miami last month, cost was one of the guiding factors in their apartment search. They wanted to spend no more than $2,800 a month, and be close to transit for Jay’s commute to Connecticut. Working with Citi Habitats broker Chyann Sapp, they zeroed in on an apartment in a building on East 59th Street near First Avenue — an eight-unit walk-up without a doorman in a neighborhood “where everyone else has one,” said Jay, 28, a financial planner.

The asking price, $2,800, was right at the limit of their budget. They agreed to pay it and the landlord sealed the deal with a non-monetary concession: Jay was allowed to bring his dog, an exception to a general no-pets policy. The couple agreed to pay their last month’s rent upfront, which the owner then used to pay the broker’s fee, Sapp said.

“It’s a two-bedroom apartment for under $3,000,” Sapp said. “When I put an apartment like this on the market, it usually goes very quickly.”